Ed gets the right photo to capture the news event. 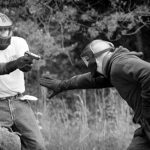 Trooper First Class Tim Rosso, posing as a drunken suspect who allegedly was shooting a gun off outside his home, gets the draw on Trooper Candidate John Feaster during a live fire scenario that puts training in the class room to practical use. Protective gear shields both Feaster and Rosso against most of the damage inflicted by special paint pellet rounds fired from revolvers very similar to the service revolvers carried by troopers, cadets learn how to survive dangerous situations by learning how to avoid dangerous habits. It also ingrains in them that bad habits can get you shot. 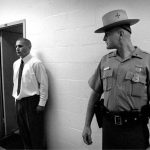 Corporal David Blake gives the “death look” (photographer’s description) to a candidate who failed to snap to attention and stand against the wall in what is known in the academy as “Standby.” The candidates must come to attention with their back against the wall and shout “standby” when every anybody comes into view, except for other candidates, trooper cadets or juvenile prison laborers. 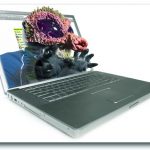 Computer Illustration for a cover story on online Predators on the internet and the danger faced by our children, in the Laurel Leader, a Patuxent Publishing Company weekly newspaper. 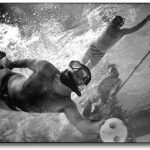 A diver descends on a fast break with backup on the surface during a game of underwater rugby played in the pool at Tne Baltimore County Community College, Catonsville Campus. 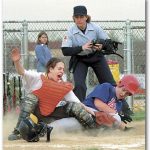 Amy Sherman of Owings Mills reacted in pain as Lansdowne’s Karen Bouchat slid into her foot at a play at home. Bouchat was called out on the play. 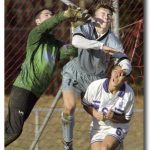 Intense action in the goal during a state soccer championship that saw River Hill High School almost win in their first year of competition. 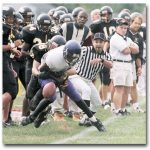 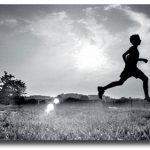 A member of the Tri-Atlantic Junior Track team, which consists of mostly 12 and under kids, runs by during a practice at Pine Grove Middle School. 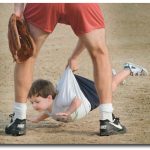 Twenty-month-old Austin Stein gets a lift up from his dad, John, who plays for the WPOC softball team. Austin fell when running around the field during WPOC’s warmups before a benefit game against the West Friendship Volunteer Fire Department. 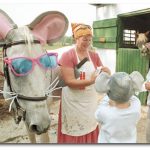 Faith looks on as Lesley Long helps her daughter, Jillian, age 8, get her gloves on. Her other daughter, Kerri, 12, is also in the act as the 3 blind mice entry in the horse costume contest at the horse rescue facility’s fall fair. 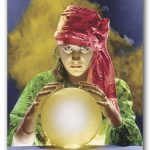 This image was for a story on Baltimore Psychics. the image is from an old cover story for the Columbia Flier and was scanned into Photoshop and colored for a story in our Lifetimes section. 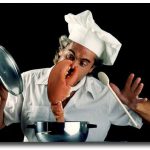 This was used as an illustration in our food section. The story was about seafood recipes for summer. I decided to have some fun with this and borrowed a scene from The Three Stooges. I used Chuck Weiss, Assistant Director of Photography at Patuxent at the time, as the model. It is a simple design, but unlike many food features, it has a sense of fun about it. 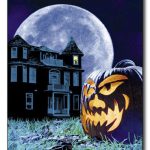 This was a Photoshop illustration using three images. One, the moon I had shot years ago for another illustration. The house is an old Victorian near where I grew up, where it was claimed by the neighborhood kids, to have a witch living there. The third image with the pumpkin and grass was shot in the studio. 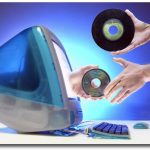 An Illustration for a story on various web or file sharing sites that give a person options to downloading music you might not be able to find on iTunes and are no longer sold as records, CD’s or tapes. 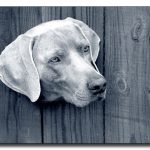 Presented in true William Wegman fashion, Zoe, Kim Kobus’s two-year-old Weimaraner female checks out the world on Misty Valley and Stansbury Mill Roads through a hole cut in the fence for just that reason. 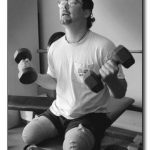 Cliff Smith, determined to be independent, works out everyday on his upper body strength to aid in his recovery from a motorcycle accident that cost him his legs. 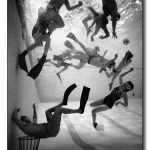 This was the lead image on a multi paper cover story on underwater rugby played at a local community college. The gentleman laying on top of the goal, (basket), is the goal keeper and is usually the person who can hold his breath the longest. This story brought me a first place in sports from the Suburban Newspapers of America for the second year in a row. 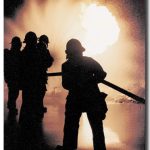